I don’t know what to write exactly about Graffiti, only recently I got pretty interested in it since it seems to come to me from everywhere.

Memes and broken windows
In books about memes there is often referred to the broken window theory. The theory is pretty simple, if you leave a window broken in the street, it will lower the barrier for others to break windows as well.

I don’t want to argue if this theory is right or wrong. New York major Rudolph Giuliani was a fan of the theory and applied it to the city. It seem to work really well, although some smart people claim there were other factors influencing the effect.

Graffiti grew up with the broken window theory. In New York teenagers wrote their names all over the subway. And while the government was busy finding out how to fight it. Art critics at the same time discovered the artistic value of some of the work.

Style Wars
The documentary Style Wars embedded above this post is very interesting to watch. It shows how Graffiti transformed, but also how ego-centered it is (a perfect recipe for artists).

Is graffiti in our western culture the most public form of self expression, is it the thing that transforms our public spaces into more interesting and colorful places. Or is it the start of a criminal society.

How would a city look if the authorities would instead of fighting, encourage people to start painting public spaces? Saturday, paintday ;)

What is art? A discussion in SÃ£o Paulo
I didn’t know, but it seems that SÃ£o Paulo has some great graffiti in the city. And ironically, the same time Tate Modern invites Latin American artists/graffiti-painters to paint the walls of the museum, the SÃ£o Paulo major is starting projects to remove the works at home. 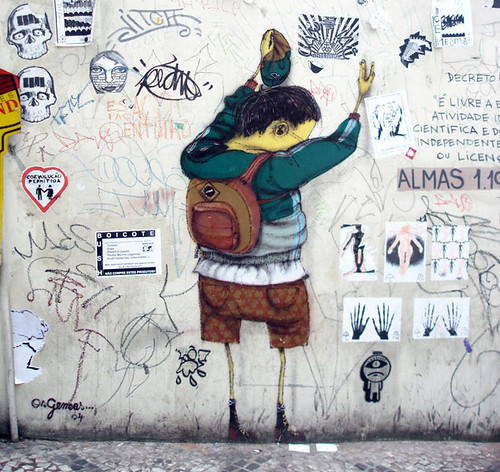