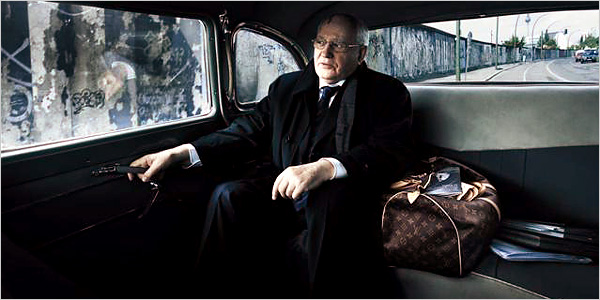 You might have seen it, I missed it. Former Russian president Gorbachev is the face for this autumn Louis Vuitton Ads. He’s sitting in the back of an old, or classic car driving down the Berlin wall. Looking worried and holding on. Somehow it’s always weird to see politicians (with a history) in advertisements.

“(AP) A spokesman says the company knew it wanted Gorbachev for the ads, but that it didn’t know how to use him. But he says Gorbachev quickly solved that problem.

The former president told the French luxury label that he wanted to be pictured by the Berlin Wall because one of his proudest moments was when it came down. The spokesman says Gorbachev believed the photograph could be beautiful and symbolic.”

The beautiful colored photo is taken by Annie Leibovitz and the New York Times wrote about it a while ago.